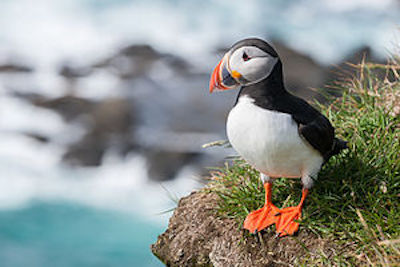 We had a great trip again this past June and we hope all who joined us for another adventure on the Maine Coast had a great and educational time with Chris Lewey and friends! Maine’s weather, even in June, is unpredictable but the weather held.  Once again aboard the Hardy Boat, we were provided with  an opportunity to see the Atlantic Puffins in their habitat off the coast of Maine. The Atlantic Puffins were out on the rough North Atlantic and I’m sure they were busy thinking about this year’s nesting season and winging their way back to Eastern Egg Rock for a busy season there in Muscongus Bay.  The Hardy Boat departed at 11:30AM sharp and cruised to Eastern Egg Rock, the southernmost nesting colony of Atlantic Puffins.

New Harbor is only five miles from Eastern Egg Rock making it the closest, easiest and most convenient way to see these fascinating birds. You spend less time traveling and more time with the birds. On the way to the EER you see Pemaquid Point Lighthouse, Franklin Island Lighthouse, Monhegan Island, the islands of Muscongus Bay and a spectacular view of the Camden Hills.

The boat circles EER at a distance of 40 – 150 feet from the rocky shoreline. Puffins are frequently sighted on the water and often seen 25 – 30 feet from the boat. There are several other species of birds to also see on this annual cruise and we attempted to get good looks at all of them, including: Common and Arctic Terns, the endangered Roseate Tern, Black Guillemot, Common Eider, Double-crested Cormorants (and occasionally Great Cormorants), Herring Gull, Greater Black-Backed Gull, and Laughing Gull. Occasional sightings from the Hardy Boat include: Surf Scoter, Razorbill (frequently seen in May and June), Purple Sandpipers, Ruddy Turnstone, and Northern Gannet.

The migratory seabird colony on EER is protected during the breeding and nesting season. No people, other than Project Puffin biologists, are allowed on the Island. The boat circles the island for about 30 minutes. The upper deck provides for a 360º view providing great birding experiences. The lower deck is protected from the sun and weather and has two heads available for guests. The galley has hot and cold beverages and healthy snacks that are available throughout the cruise.

We have used the Hardy III for years and have always had a great experience working with them on this wonderful Maine Coast adventure. 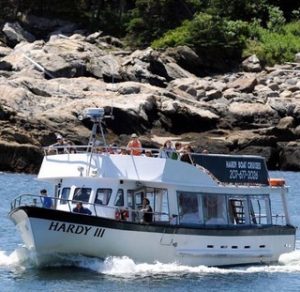 As a sneak preview of what we anticipated seeing on this very exciting adventure, we asked participants to watch this YouTube presentation:
Atlantic Puffins – Return of the Native

Please send this on to anyone who you think may have an interest in joining us in 2019 for next year’s adventure!